Although Jewish refugees probably fled to Egypt after the Babylonian conquest of Palestine (Jer 42:1422) by Nebuchadnezzar when they were dispersed throughout the known world, we really have no good evidence of such from archaeology in Egypt Jewish tour.

It was probably not until the wars of Ptolemy I against the rival successors of Alexander the Great (320301 BC) that the first scale immigration of peoples calling themselves Jews into Egypt. Invading Palestine four times in those wars, Ptolemy I is said to have “removed from the land of the Jews into Egypt up to one hundred thousand people, from whom he armed about thirty thousand chosen men and settled them through the land in the forts” (Ep. Arist. 1213). While Aristeas numbers are likely exaggerated, various papyri, inscriptions and ostraca from the third century BC nonetheless testify to the presence of substantial Jewish populations in all parts of Egypt.

In fact, as soon as Alexandria was completed, the Jewish people probably began to inhabit specific destricts. They were probably very different than their more conservative counterparts in Jerusalem. Though both worshipped the same god, the Alexandrians seem to have found it difficult to identify him as their god. To them, wisdom was far more important than worship.

The Jewish school of Alexandria reached its greatest fame under Philo Judaeus, who lived in there during the early years of Christianity. He came from several generations of wealth and his father enjoyed Roman citizenship. His brother, Alexander, held the high office of alabarch at Alexandria, which meant that he was responsible for collecting taxes owed to Rome. This brother may have in fact been the Alexander mentioned by St. Paul in the Acts of the Apostles. If so, he was unquestionably the foremost Jew of Alexandria and indeed one of the richest men in the ancient world. 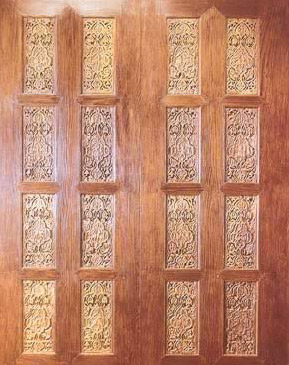 So rich was Alexander that when Herod Agrippa had financial problems during his early years as emperor, Alexander lent him two hundred thousand drachmas, which represented only a small portion of his wealth. He even came to his assistance once more by assuming the total cost of the silver and gold plates that adorned the nine gates of the rebuilt Temple of Jerusalem. His son, Marcus, married Herod’s daughter, Berenice.

However, another of Alexander’s sons turned away from his religion in order to pursue a political career. After having held several offices in Egypt and Palestine, Tiberius Julius Alexander became prefect of Egypt under Nero. During one of the Jewish riots in Alexandria, it was he who turned the Roman legions upon the revolting Jews resulting in some 50,000 deaths. He even played a key role in the great siege and destruction of Jerusalem under Titus.

Many may suppose that it was the Muslim invasion of Egypt that resulted in the decimation of the Jewish community in Egypt, but it was actually the Jewish revolts against the Romans. Rome became so frustrated with the Jews that at its height point during the days of Tiberius, Sejanus, the most influential Roman in Tiberius’s court, imitated measures that were designed to destroy the whole race, and after Tiberius’s death, Gaius was more than eager to fulfill Sejanus’s plan. 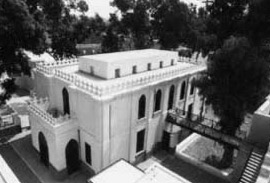 However, the Jewish community in Alexandria seems to have survived these Roman emperors into the period of Christian legitimacy. Cyril, an early Christian Patriarch of Alexandria seems to have been determined to rid the city of both pagans and Jews. In retaliation, the Jews began raiding Christian homes and launching secret attacks. One evening, the Jews ran through the streets of the city shouting that the Church of St. Alexander was consumed in flames. The Christians hurried to save their church, but when they arrived, the Jews attacked and killed many of them. This rues and loss of life incensed Cyril, and he ordered his army of supporters to the Jewish Quarter of the city, where they plundered the synagogues, set fire to Jewish homes, and chased many of them out of Alexandria.

Then around 628 AD, many more Jews fell victims when they were persecuted by Heraclius in retaliation for their alliance with the Persians who were causing problems in Egypt not long before the Arab invasion. 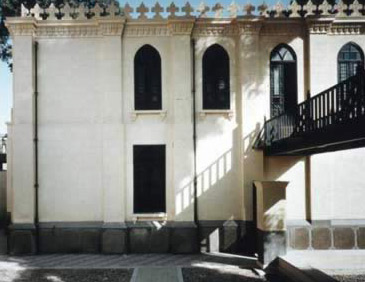 However, even today there remain Egyptian Jews, though very few in number, and their decline has been slow for the most part after the Roman period. Many moved to the emerging city that would become today’s Cairo during the Fatimid Period, where they settled east of the ancient Roman walls in an area known as al-Mamsusa. Though there were rifts in the Jewish world at this time, the various sects within Egypt seem to have cohabited peacefully and even intermarried. There were three synagogues mentioned by Ibn Duqmaq in his description of Fustat in the fifteenth century. Two lay within the walls of old Fort Babylon (Qasr al-Sham). One of these was of course the famous Ben Ezra or Palestinian synagogue, known as Kanisat al-Shamiyin at the time and the other was Kanisat al-‘Iraqiyin, which was an Iraqi or Babylonian synagogue close to the church of al-Mu’allaqa. The third waa a Karaite synagogue, built later and therefore outside of the walls.

During the Fatimid Period, Jews emigrated to Fustat in large numbers, attracted by the lack of persecution, though a notable exception was during the reign of Caliph al-Hakim, though the Egyptians in general seem to have suffered during this period. However, persecution was not the only force that drove Jews into Fustat, for it was a time when Egypt offered possibilities for amassing fortunes. They found that prosperity and some attained very high status within the Muslim community. 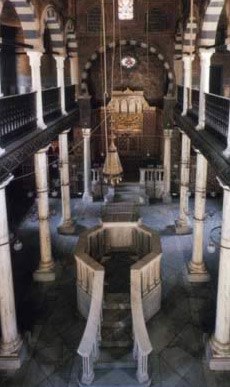 But as time progressed, there numbers slowly dwindled, just as those of the Christians. However, Egypt continued to have a substantial number of Jewish residence up until the modern era.

While no specific synagogue remains have yet been discovered in Egypt from very ancient times, a sizable number of synagogue dedications have been recovered in Middle and Lower Egypt, some dating as early as the third century BC. In addition, numerous references to synagogues exist papyrological and literary sources. By the first century AD, they were clearly established throughout Egypt. The Jewish philosopher Philo, writing in this period, states that in Alexandria alone many synagogues existed in each section of the city.

The synagogues also appear to have been quite large in size. A land survey in Crocodilopolis from the first century BC records that a synagogue on the outskirts of the city occupied two-and-a-half acres of land. Moreover, its congregation leased out a “sacred garden” on an adjoining one-acre plot.

Synagogue dedications are nearly identical to those recovered for Egyptian temples of the period, the chief difference being the substitution of the word “synagogue” for “temple.” Various allusions in inscriptions to asylum rights and to such architectural features as sacred precincts, pylons (monumental gateways), and exedrae (usually temple annexes for philosophical debate) suggest that the synagogues in this country were modeled after local temples. If so, the absence of altars and idols would have distinguished them from their pagan counterparts. 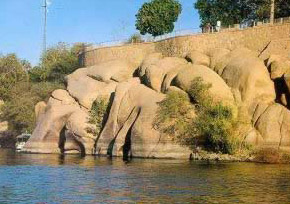 One of the best known Jewish communities existed at Elephantine Island in the Nile River at modern Aswan. They and their temple are known from Aramaic papyri of the fifth century BC. Their Temple of Yahweh was known to exist before the invasion of Egypt in 525 BC by the Persian king, Cambyses, but its precise location is not known. From this papyri, we know that in 410 BC, the priests of the nearby Temple of Khnum convinced the local governor, in t he absence of the Persian satrap (provincial governor), to attack and destroy the Jewish Temple.

Though the Jews wrote to Bagoas who was Governor of Judea, and Yohanan, High Priest in Jerusalem, they received no assistance at first. However, two years later when they wrote again to Bagoas and to the two sons of Sanballat, an earlier governor of Samaria, this time they were rewarded with an answer. A messenger was sent to request the permission of the Persian satrap to rebuild the temple. Indeed, according to one papyrus, it was restored in 401 BC. However, in 332 BC, shortly after the end of Persian rule in Egypt, the Jewish colony was dispersed and its temple once again disappeared.

Another, later Temple of Yahweh also existed at Leontopolis in the Delta region. It is evidenced by the work of the first century Jewish historian, Josephus. He tells us that, after the death of the 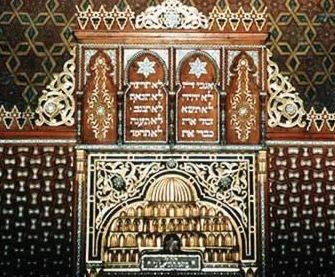 High Priest Onias III, his son Onias fled to Egypt where he became a military commander of the Jewish military colony at Leontopolis (Tell el-Yahudiyeh). This was, of course, during the Greek Period, during the reign of Ptolemy VI, whom he asked for and obtained permission to build a temple. According to Josephus, this was built on the site of an old Egyptian temple and was modeled on the Temple in Jerusalem, though of course it was smaller and less splendid. This temple was founded in 160 BC, but was destroyed by the Romans in 74 AD after the Jewish Revolt.

Today, one of the most interesting sacred sites of Old Cairo is one of the remaining Synagogues in all of Egypt. This is the Synagogue of Ben Ezra, which stands in a pleasant, shady garden near the churches of St. Sergius and St. Barabara. It has recently been the subject of a restoration project. According to tradition, there has been a Jewish community in Old Cairo since the time of Moses. However, the oldest actual documentation of this community is from records written by medieval travelers, such as Benjamin of Tudela (c 1173), who visited the synagogue and claimed to have seen the Torah of Ezra the Scribe. 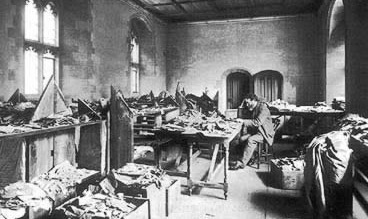 The first Synagoge in this location was destroyed when the Romans took Egypt, and later, during the time of the Arab conquest in 641 AD, it was given to the Copts by the Muslim general, Amr. The Coptic Christians built a church on the site which was dedicated to St. Michael. However, this church was destroyed during the rule of Caliph el-Hakim and in the twelfth century, it was given back to the Jews. A new Synagogue was built on the site by Abraham Ben Ezra, the great Rabbi of Jerusalem.

Late in the 1800s, a hoard of ancient manuscripts, known as the Geniza documents, was found on the site. A geniza is a place in a synagogue in which obsolete paperwork would be discarded., and there were some 250,000 documents found here. Included was an ancient Torah, which was split up and portions are now owned by various institutions in Europe and America. However, some interesting documents remain, including a copy of the Torah dating to the fifth century BC written on gazelle skin, a drawing of a seven-branched candlestick on dear skin, and the manuscript known as the Atlas of Moses.